I’m currently drawing a blank. This isn’t due to the fact there there is not enough to say, but that I’ve already said so much about GDC. The highlights of my experiences; however, are worth re-emphasizing. Luckily, I have these nicely captured:

In this post, I wrote about how this service-oriented Conference Associate (CA) community brought out the best of each member, and without the need for conformity, is able to achieve a highly functional unity. People spend their whole lives looking for ways of authentically being part of something, which I find elegantly captured in the Conference Associate program.

Now, the cohesion and synergy of Game Developers Conference (GDC) Conference Associate (volunteer) program, has, in my opinion, not so much to do with the fact that we’re all into games (It’s a bit less tangible than that). We’re all drastically different types of people, some very introverted, some very extroverted, some are artists, musicians, programmers, designers, producers, students, businessmen, young and old, and of all sorts of nations. We are all united, however, for a common cause which is what I would say the aim of the church should be, uniting all types of people under the one spirit, that is over all, through all, and in all. One of the most observable differences is that the people who are GDC Conference Associates all pretty much love each other for who each person is and are almost expected to see and do things differently. It’s a challenge to make everyone feel included, but at GDC they’ve managed to make all 350 Conference Associates feel like they are a part of something good.

This was in regards to a video I had made about the game industry and GDC:

People from all different vocations from all over the world at all different points in their career gather for one week to discuss innovations and future directions of video games. There is so much collaboration and sharing of creative and expressive endeavors through interactive media, and at GDC, you get to meet people from all the big companies as well as the independent developers. It’s a diverse and friendly community of creative thinkers, artists, musicians, programmers, designers, and so much more.

This video follows the story of the game developer community and shows the faces behind the products. These faces are diverse in gender, race, nationality, profession, and age, all advancing the forefront of video games. Hopefully, seeing games as more than just consumable products helps to show the amazing process that goes into creating them.

In this post, I go through my very first year as a CA and at GDC, specifically addressing the question of why I would be a GREAT CA. I give feedback from the point of view of a veteran with many additional years on what a person would experience their first time. I conclude with:

I don’t think I’ve answered the question yet: “why would I make a great CA?” Well, I believe that only Tim and Ian know who actually “get it.” And I hope that among the ones that do, I am somewhere in there. But of course, I know how to be on time and do the tasks. I know how to encourage people and be easy to get along with. What makes me a great Conference Associate is that, in addition to all the necessary things, I want to see the culture of what is so rare and uniquely good preserved and spread to a world that doesn’t even realize how much it matters.

If I were to guess what the secret is, I’d venture to say that it’s some combination of: love, joy, peace, patience, kindness, goodness, faithfulness, gentleness, and self-control through an abundance of grace and humility. That’s my understanding, and the understanding of what I believe would also make a great Conference Associate.

I knew I had a great concept for what I could say about being a Conference Associate, and, in the last post, I reminded myself that I wanted to recapture what each year has been for me. That’s a great way to see the progression of my identity here over the years.

In 2005, I was freshly 21, my grandfather had just passed away, I was in my last year of undergrad, and it was the first year I’d ever felt like I was an adult. I came to this conference as a doe-eyed noobie with no idea who I actually was.

From the beginning, the people I met that year saw me for way more than I could see of myself. They had no reason to see me as anymore than a volunteer who’d better be competent and reliable.

It’s funny to see myself becoming the person that they saw me as 7 years ago.

That year, we were in San Jose. I’d heard so much about this venue, and this was, perhaps, the last time it would ever be there. GDC had outgrown the San Jose venue. For that year, I got to experience the intimacy of where GDC had been held for so many years.

By then, I had started my Masters at Delaware. Since the first GDC, there were many opened doors to walk through, and I started to see all that was possible and dream about what I could become. It was this year that I noticed the poster sessions at GDC, and decided that I’d be worthy of my own spot on the poster boards.

Back in San Francisco, this year I got to be a speaker. I was starting to establish some presence among my peers, as I was well oriented by my third year at GDC. I got to talk to a lot of professionals about my interests. It was here that I’d made a great impression on who’d become my PhD adviser in Santa Cruz. I also got to see a lot of the more VIP aspects of GDC, which was really just the props of having that “Speaker” ribbon and an invitation to the speaker party.

One person remarked that he’d never seen me so focused and serious before. 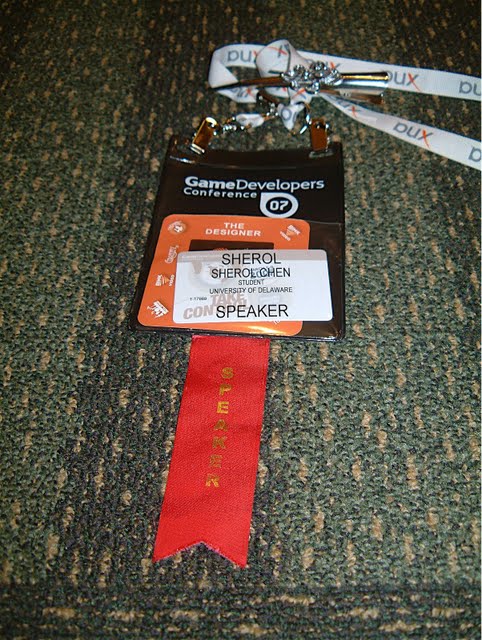 It was that first year that I hadn’t CA’d, and I learned that being a Conference Associate was the majority of my GDC, at least the important aspects of it. I decided to volunteer anyhow, b/c it wasn’t the same conference otherwise. It felt too impersonal to just walk around from one room to the next, while all my friends were working together from one quest to the next.

This year I had moved to Santa Cruz to start my PhD work. I spent much of this year redefining myself, being away from where I’d spent most of my life. This was the first year that I didn’t have to fly into the bay area. I remember rushing in late off of the Caltrain, having not budgeted my time appropriately. 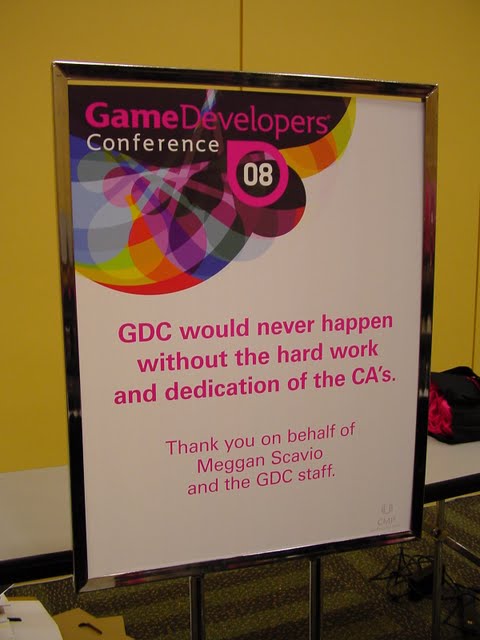 After my experiences the year before, I couldn’t imagine not being a CA.

This year I was a speaker at a conference here and another one at Stanford that week. This was the year that I got a film crew into GDC to make our documentary. This year, I had a major identity overload. In the end, we did end up with a killer podcast about the game industry. I, on the other hand, felt the toll of trying to be too many things at once.

At this point in life, I’m starting to realize that I am capable of being many of things, that there was no need to prove myself; rather, I should focus on the role at hand and give it my all.

In an email to Tim, I once acknowledged that:

I’m getting to a point where I can see the end of my time as a CA.  Like, maybe within the next couple years, I’ll be at GDC as something else.  On one hand, this makes sense, but maybe I’m getting ahead of myself again..(I’m still a pretty small fish)…

This kind of makes me sad though, so this year, GDC is about being a CA, b/c I want to be able to contribute as much as I’ve received while I am most directly able to.

That year I got to go to the Final Fantasy 13 release party. It was also that year where some of the Christians got together and had our first morning prayer meetings, that I recap here: http://blog.ffpaladin.com/2010/04/this-is-church-at-the-game-developers-conference/

This was the year that I began to really see myself as a leader in my community. Now, last year, I lead a small team of people that I brought, but this year, I was starting to see my own influence by virtue of who I was.

This past year showed no decline of growth in my identity. I came to stuff bags. We had our prayer meetings, and I was able to bring in a fair number of industry attendees into our network. Through my friends and connections, I got to go out and eat with highly influential people in business, who really have no immediate reason to care who I am (but enjoyed my company nonetheless).

I got 2 tablets and a smart phone, which is a combination of knowing people, but also undeservingly received for just having a better-than-average attitude.

I even helped my friend Vance get his tablet, after he threw his paper in the trash, thinking he wasn’t eligible. We sprinted back to the hotel to dig through the trash, and he got his device.

I tested out the new brag-sheet system by trying to brag about myself, which I got props for being creative to attempt.

I watched Tim and Ian receive the ambassadors award at the Game Developers Choice, representing the bigger picture of what I’ve been a part of these past years. 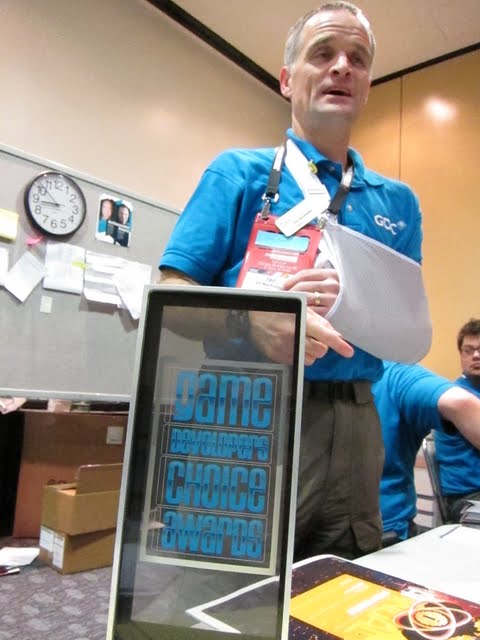 Why would I still make a great CA?

Well, nothing’s really changed to make me any less great than I’ve been in the past. It seems that I’m merely growing into the person that the CA program has always seen in me. It’s a realization that unfailingly happens as a result of the circumstances that GDC creates each year. Somehow, without even trying and through the reflection of this unique group of people, do I see myself headed in directions I could never have imagined on my own. Part of that is becoming the even greater CA and individual that you all have seen in me, and the other part is seeing each person for the individual greatness that they may yet to see in themselves.

One thought on “What Haven’t I Said about GDC?”