So, what do you want to know about the game industry? The Game Developers Conference (GDC) is coming up again, and I’ve still yet to recap my adventures from last year. I suppose I’ve been a year behind for a while now. I guess I shouldn’t complain about having too much to write about. Going through my photos, I find the most notable highlights to be: (1) Behind the Scenes, (2) Parties, (3) Free Stuff, and (4) Sessions. I’ll leave out the Jesus stuff for my next post.

The conference associates are at GDC the Sunday before the conference opens. We spend a whole day setting up for the attendees. 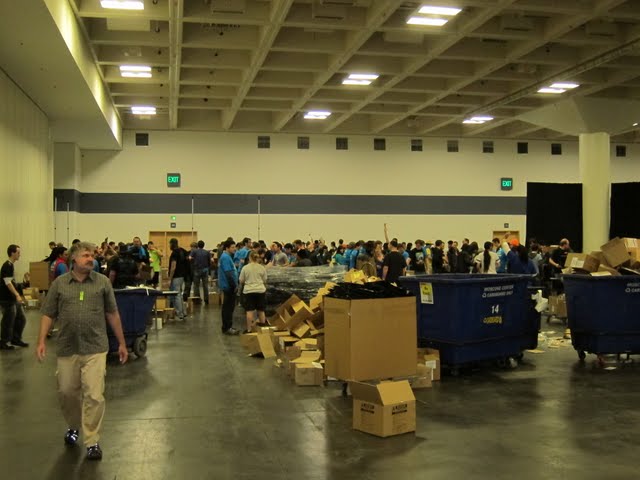 The evening before, we have a mexican dinner (which has been nearly the same for the last 7 years), and we are updated on the ins and outs of the upcoming week. 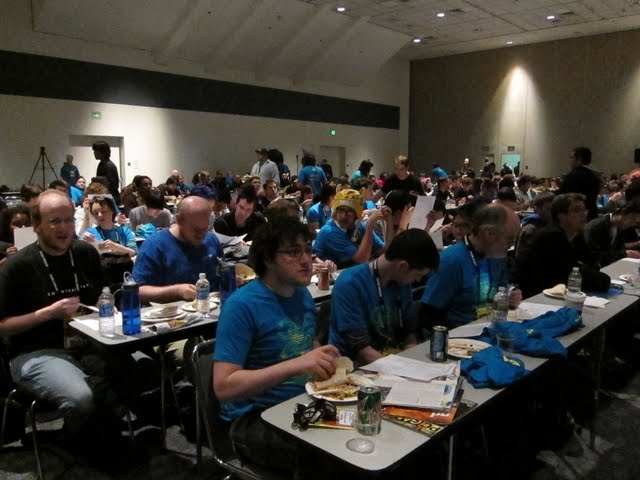 Some people have been coming to this conference for over a decade, and for even those who’ve been CA’ing for their second time around, there is a unique warmth of seeing the friends that you only really see once a year. It’s notable that the memories and relationships made in 5 days can sustain a lifetime. 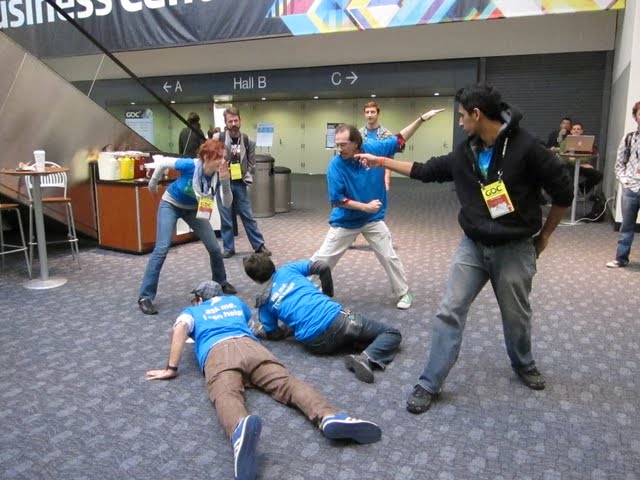 My two favorite duties at GDC are being a floater and being an office assistant. As a floater, you are constantly on the move, ready to troubleshoot at any moment, ready to highlight the efforts of those responsible for numerous aspects of the conference. Office assistants are on call for any spontaneous needs and emergencies; they are the wild cards of the group. Sometimes you get to sit in a session, you wouldn’t have otherwise. I usually hope that I get  into something new and unusual. Often, when you are summoned as an office assistant, you are then place in an unanticipated situation. Bring it on! 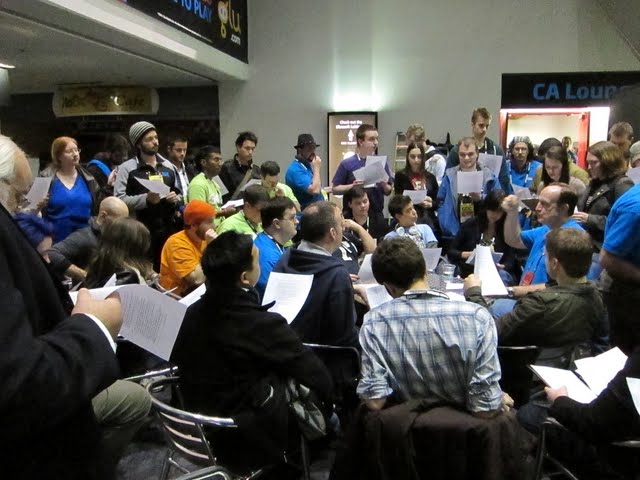 The image above is the floater meeting. If you see someone with a radio, it is 99% likely that’s a floater.

Outside of working “behind the scenes” and the random lunch conversation, much of the connecting happens at the countless parties. 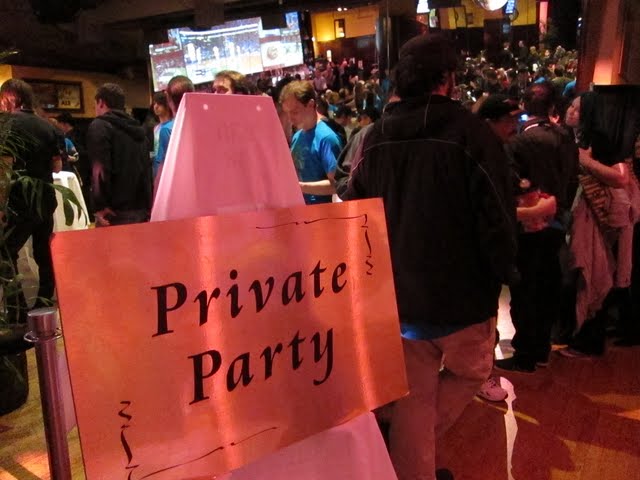 Tuesday night I went the IGDA party with my lil bro, Kemp. Talked with Ian about the Global Game Jam. Got to reconnect with Jeremy, a prof from USC. Ran into Anne, Gillian, and Jane from UCSC. Jane introduced me to a guy from Microsoft, who gave me a glimpse of what goes on in the high end of the game industry. 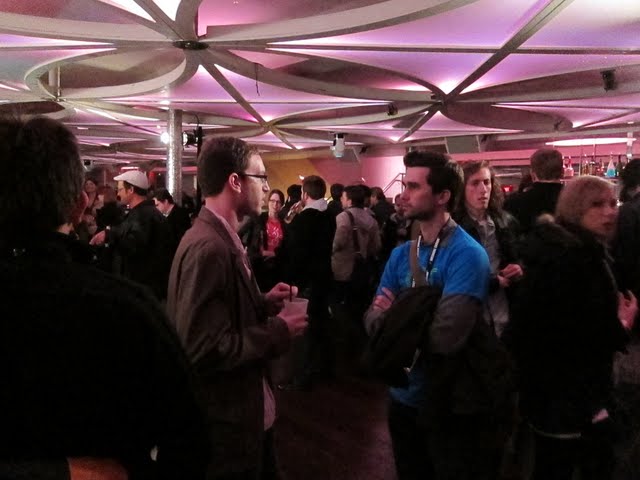 I ended up sharing a cab with him to a fancy fusion asian restaurant, where we spent about $100 a person for dinner. That was after I met the guy who created Xbox Live. The conversation went like this, “oh, so you worked on Xbox Live?” I’m soon corrected, “worked on? He created Xbox Live!” That same conversation happened at dinner when I asked a man if he was a lead on the game, “Elite Beat Agent.” “Lead? He owns the company that made Elite Beat Agent.” 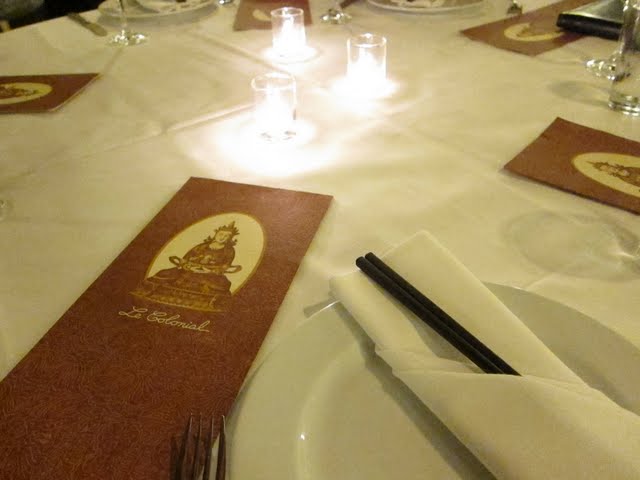 I suppose my genuine enthusiasm and fresh (noob) perspective were somewhat amusing. The conversation was mostly on the game industry and transitioned to jazz saxophone. Apparently, one of the big industry guys there was also a saxophone player. This was a big perk of being introduced as “Jane’s little sister.” By the end of GDC, I’d also met the voice of Miyamoto (or his Japanese-English translator). 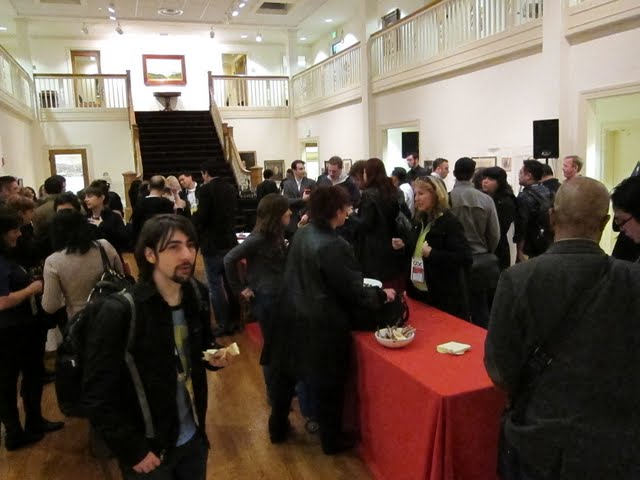 Two other big parties that are always good are the “Women in Games” and the “Blacks in Games” receptions. To be honest, I know enough people at this point, that I don’t really need more to occupy my time at GDC. I’m at the point where each new person is just added bonus to an already satisfying circle of friends. 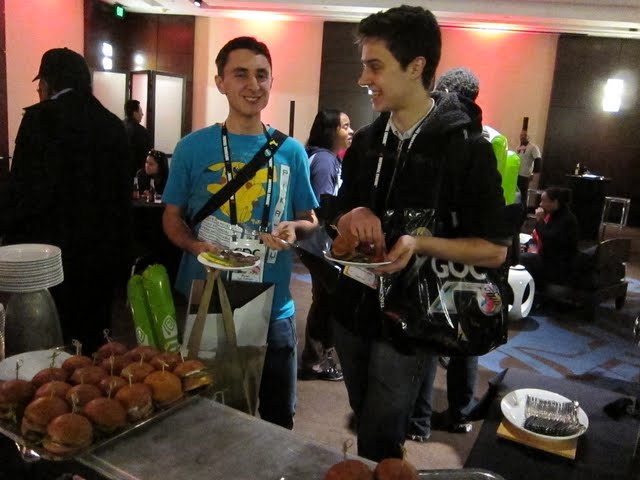 My drink of choice is always cranberry juice, club soda, and a lime! 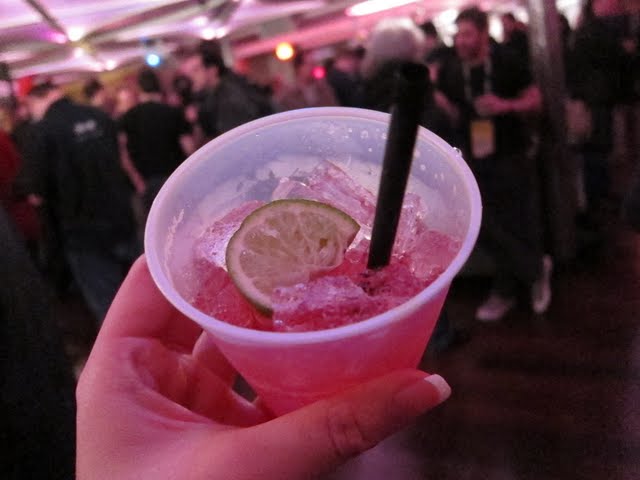 The free stuff at GDC is about 90% meaningless to me at this point. Clothes and bags are cool. All the other stuff I give away to my friends. 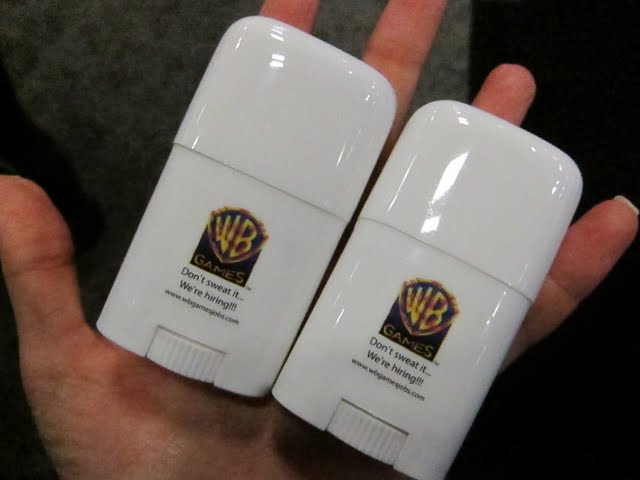 I was particularly fond of this year’s conference game that they do every year. Cards of popular games from Pong to Heavy Rain we distributed for what they called the Meta Game. I didn’t play much, but I collected the cards for my favorite games. 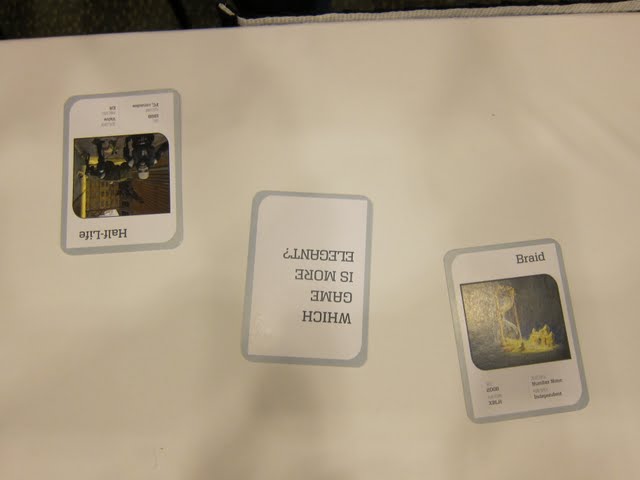 Ok, so I left GDC with 2 tablets and 2 smart phones. I knew that Google was giving away something, because you eventually hear rumors, if you pay attention. People walked out with either a grey or a green coupon with mysterious consequences. A couple days later it was revealed that one coupon would get you an $800 tablet and, the other, a $600 phone (or maybe it was 600/400… I don’t know, b/c I didn’t try to sell my gifts).  It’s really a brilliant move, because targeting developers gets you more apps. It was cool for me, b/c I was already developing Android apps.

When I went to collect my device, I was stopped by people trying to trade with me. Apparently, I was team tablet. When I went to get my tablet, I just thanked them and showed genuine enthusiasm as a developer for this gift. 15-20 minutes later, after I was long gone, one of the guys found me in a crowd and handed me a phone as well. He said, “of all the people we gave devices to, you were the only one who showed enthusiasm for making something on it. We felt that you deserved to have both.”

The friend I was standing with was just telling me how he never wins anything. I felt really privileged and, yet, really undeserving, as I am holding a brand new smartphone and tablet. Luckily, he ended up with some cool devices for himself by the end of the conference. 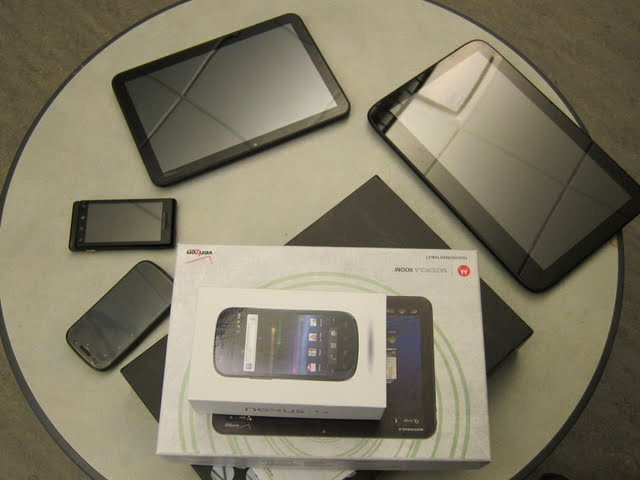 I had also heard of a session from Intel giving away free tablets. I remember going late and not getting the official sheet of paper. My friend Geoff just handed me his and left. I saw another friend Vance leaving early (on my way in), and ran back to tell him that he was still eligible as long as he has his sheet. Vance says, “I threw it away.” We sprinted back to the hotel and dug through the trash to get his tablet. It was quite an adventure, and I will never stop telling this story. Who throws a tablet away in the trash?

After the conference, I was burning time in SF and one of two friends I was with handed me his smart phone, b/c it was a Verizon phone (the other devices wouldn’t work with Verizon). That was incredibly generous of him. His phone was put to good use as a research device that I loaned one of my lab-mates. 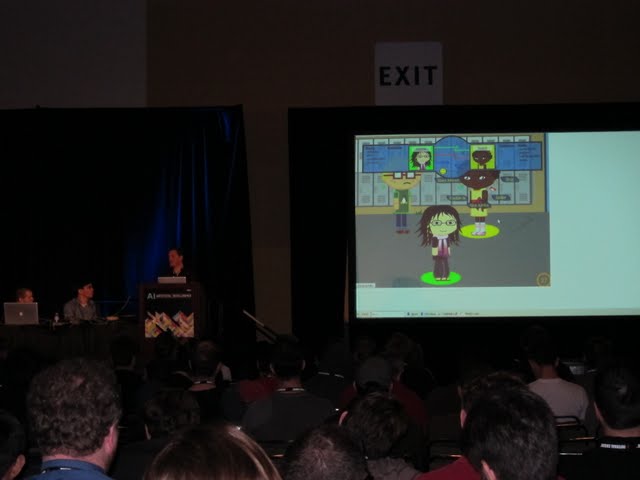 Our group, UCSC’s Center for Games and Playable Media had a bigger presence than ever before. I was working the sessions of my research group and as they demoed one of our games, I realized that I was dressed just like the character I had my roommate draw of me. Yea! CHLOE! 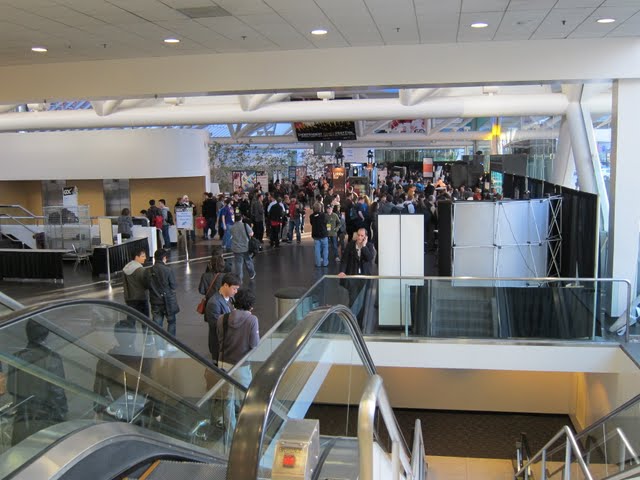 Check out the game: http://promweek.soe.ucsc.edu/

It’s a finalist for Technical Excellence in the Independent Games Festival (IGF). Two great events at GDC are the IGF and the Game Developer’s Choice Awards. Last year, Minecraft practically won both, which shows the interesting shift of how we now have the technology to allow individuals to make award winning games. 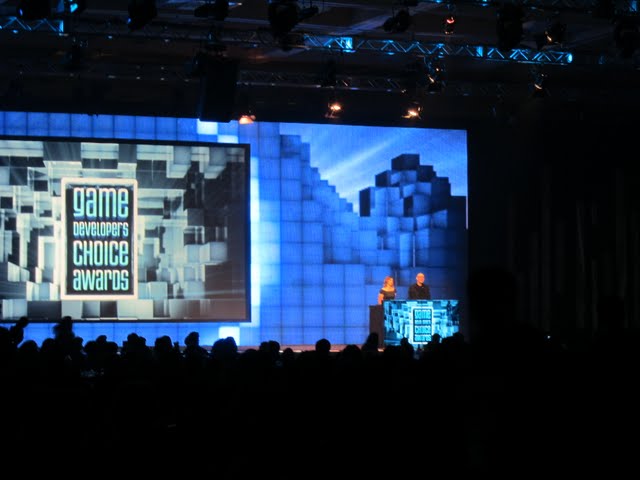 My time at GDC ended with a free hotel suite to myself, and that’s it for the typical GDC experience. I’m about to get atypical in my next post.

6 thoughts on “If GDC is Anything Like Last Year…”