Students examine a meaningful historical artifact from the game, “Train”

TAing doesn’t sound like much fun when you’re finishing your PhD; however, I have the uniquely fortunate opportunity to TA for Brenda Romero. First, I’ve never seen someone so capable of building the professional character of students so naturally. She is not only a game designer, but so remarkably intelligible such that just about every facial expression she makes to every word she utters contains something to be learned. I’d say that this class is not only life changing for me, but undoubtably, every student in this class.

So, what game is most meaningful to you? As Brenda went around the class, I made sure throw mine out there– Final Fantasy 4. A couple students struggled to find their one game, but the list was not very difficult to create. Things got a bit more serious when students started explaining why these games were meaningful.

For many of us, these games referenced a time in our lives that was meaningful, or inspired with a message that changed our hearts or trajectory in life somehow. I really wanted to speak up about why my game is meaningful, but instead, watched students dig deep into their souls for how their game motivated and influenced them.

Hearing the students share, I found myself knowing the exact feelings they were trying to describe. FF4 came out in a time in my life when I was eagerly looking for answers. FF4 was a game with strong female characters, a game about the most desolate situations, and how the loneliest of people can find friends and save the world. It’s the game that made me want to make games– I used to sit on the school bus and daydream about making its sequel. This game taught me perseverance, hope, and justice, when nothing else was around to shape me. 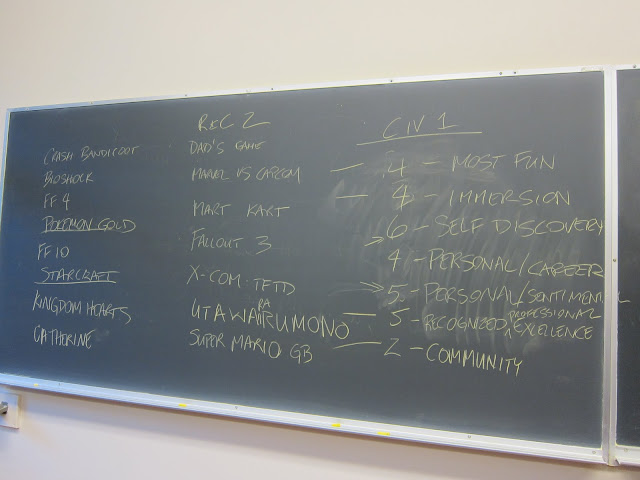 “Is the most meaningful game, always the most fun game?,” Brenda asks. She asked if we were on an island and could only bring one game with us, what would ours be? Mine would not be my most meaningful choice (– it would be Star Craft). Final Fantasy 4 is such a meaningful game for me, that I don’t think I could ever play it ever again. Speaking of whether games could make people cry is a no brainer, it happened that day in class, and for me, I’ve got my own one time where I cried my eyes out for my game.

Unanimously, everyone seemed to walk away with the feeling that a quite unique and “meaningful” learning experience had occurred.  After every talk or lecture she gives, as class ends, Brenda may ask me how I think things went. It’s safe to say that she is, perhaps, the least aware of the influence she naturally has– and, perhaps, it is this unawareness that makes people like her exist.

7 thoughts on “What Game is Most Meaningful to You? (Me: Final Fantasy IV)”