I know, I know. I’m a year late. I’m sure that every opinion has been voiced by now. For starters, I’ll give my full experience at the panel, “Game Design Challenge 2011: Bigger than Jesus.” I’ll talk about the ways in which GDC11 was bigger than Jesus, and end with how much of Jesus I experienced at GDC.

Let’s address the elephant in the room. So yea, part of me can’t help but consider being a little offended by the sacrilegiousness. Part of me is a bit too lazy to care, but most of me was excited for some action! To be honest, the description of the event is quite respectful. They simply chose a title that stirs shock. 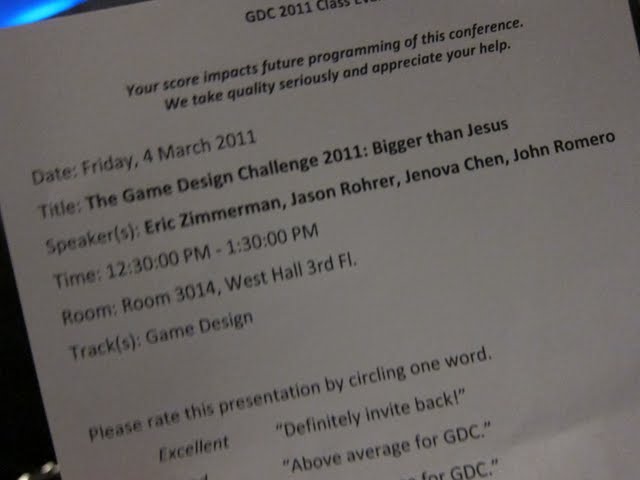 Each designer must create a game that is also in some way a religion – or a religion that is in some way a game. Every year the design challenge is an opportunity to address a wider issue around games and the larger culture. Increasingly, games are becoming part of players’ lives – through handheld and mobile devices as well as the lifestyle invasion of social network games. Religion can be seen as humanity’s oldest model for a social network, connecting people through time and space by way of community, philosophy, and social ritual. Is designing a game-as-religion really so far-fetched? Perhaps not. Many ancient rituals of divination and devotion, from the I-Ching to the Kabbalah, have extremely game-like elements. And some credit the birth of Scientology with the bet that a science-fiction author couldn’t create a new religion. How will our game designers cope with this holy hand grenade of a design challenge? You’ll just have to find out for yourself. At the session, the panelists will present a unique solution to this game design problem. And the audience plays an important role as well – by voting in the winner of the Game Design Challenge 2011. Expect a free-wheeling session of brave new game design ideas, along with unpredictable debate and dialog.

Someone from Soma Games remarked that it’s interesting to see an industry in the midst of so much innovation and transition seeking meaning. Was this an instance of the game industry looking for Jesus?… Or, less offensively, looking for their own Jesus? I have to say that of all industries, video games is probably the one where you find the least amount of Jesus. It’s because Christians are such technopobes…lol. 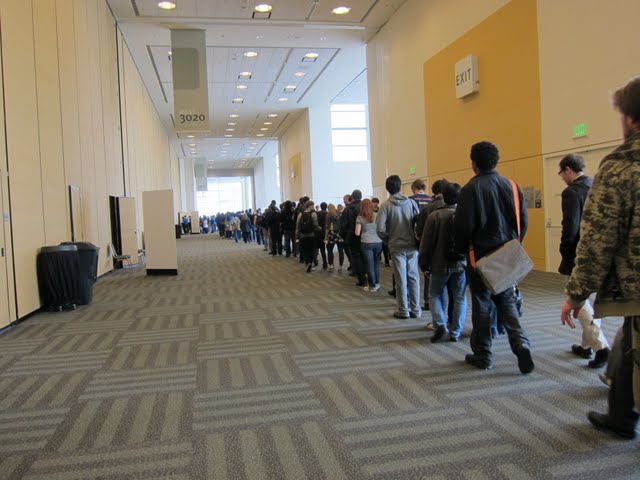 The line for “Bigger than Jesus”

Jason Roher was up first. He’s made some elegantly meaningful and beautiful games. I’m not surprised that he won the challenge. His game was called, Chain World, if I recall correctly. (It’s tough trying to remember something you saw a year ago.) Basically, it is a world on a USB stick, and each person plays until they die, after which the stick is passed along and another person gets a turn at life, each person leaving their own impact on the world. 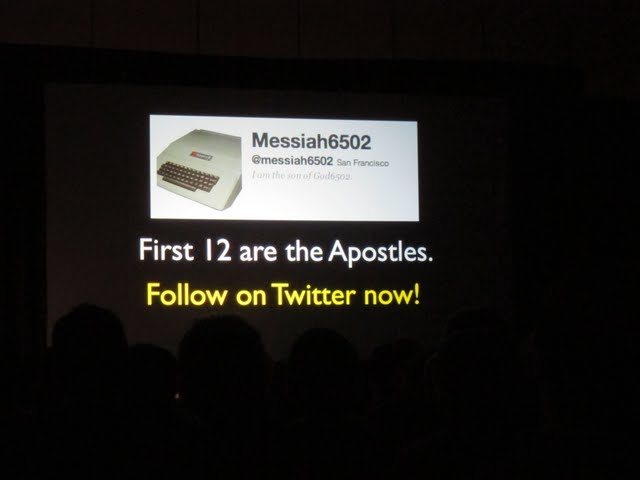 John Romero’s was probably my favorite. At the beginning of his presentation, he presents God as a Twitter account, God6502. God6502 has only one follower, Messiah6502. You can only follow God indirectly through Messiah6502. That, in itself, is well played. So as John presents Messiah6502, he says, “the first 12 followers of this account will be the 12 apostles.” 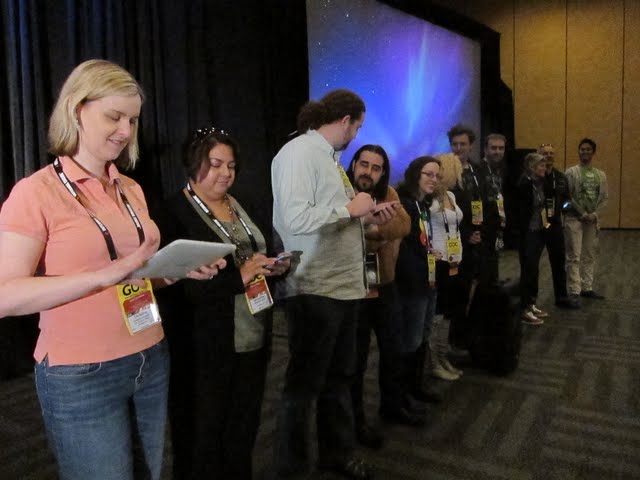 Besides the people who knew about it ahead of time, I’m pretty sure I was the first or second one, since I was already on Twitter. They had 12 of us lined up front and handed us pads of sticky notes. They said that we had 1 minute to give the post-its out, each person with a post-it of a particular color would be a potential convert. If you think about it, it’s a pretty interesting model for evangelism. I mean, some people would go person to person. You can imagine handing out stacks of post-its per person and having them convert audience members on your behalf as an optimization. I wasn’t that clever. At the end, I think I just threw my pad into the audience.

Apparently, some of the notes had star stickers on them. Each star sticker was to represent a miracle. The apostle with the most miracles won. 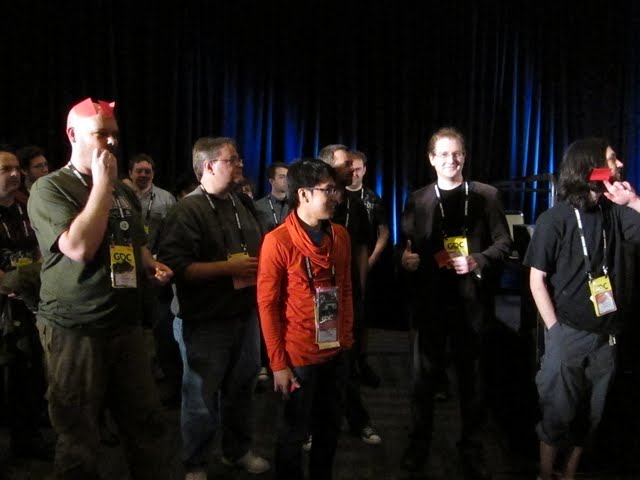 I think I might have tied for first place, but I really wasn’t very good at keeping my own score. Anyhow, it was all for the best, b/c the game ended with Romero revealing that he was the messiah and the winner was to assassinate him to take over as the new messiah. I found the game very well thought out and almost appropriately offensive at the end, all things considered. 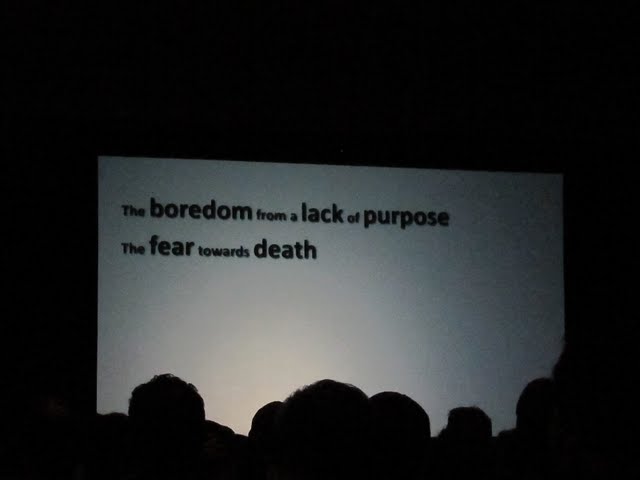 Jenova’s was probably the only one worth being offended about. It just felt like someone speaking as an authority on something he didn’t know very much about. I mean, when you start saying that religion only exists because of “boredom from a lack of purpose” or a “fear towards death,” you start sounding like you take yourself very seriously. You could compare him to Joel Olstean, and he’d sound just like a televangelist for Atheists.

Afterwards, my friend, Tronster, remarked that he found it ironic I was up front as one of Messiah6502’s 12 disciples.

While the panel prepared for their attempts to be “bigger than Jesus,” we were praying to Jesus every morning at 7:30 am onsite. This past year, was bigger than ever. I mean, getting to Moscone everyday by 7:30 am is no joke. (Our official hashtag is #gdcpray.) 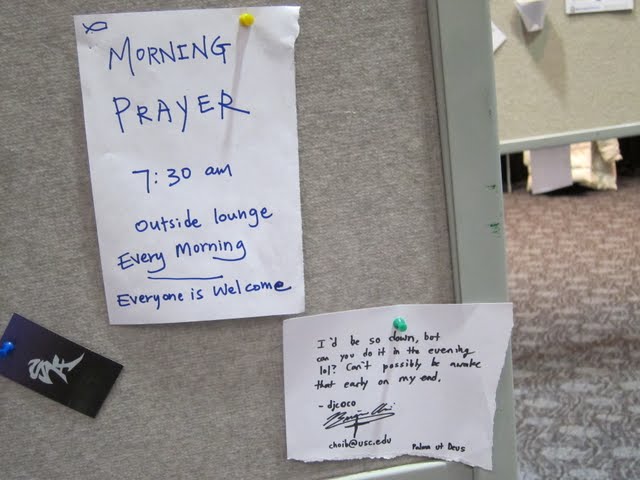 Is anyone among you in trouble? Let them pray. Is anyone happy? Let them sing songs of praise. Is anyone among you sick? Let them call the elders of the church to pray over them and anoint them with oil in the name of the Lord.  And the prayer offered in faith will make the sick person well; the Lord will raise them up. If they have sinned, they will be forgiven. Therefore confess your sins to each other and pray for each other so that you may be healed. The prayer of a righteous person is powerful and effective. 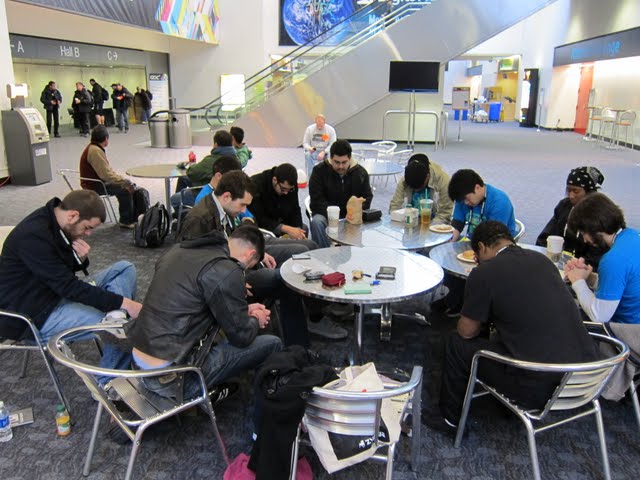 The next morning, my lil bro Kemp and I met up by 7:15. We prayed for our bro, Grant. Then prayed about jobs. More than ever did people step up to lead and share. There was a strong consistency this year. Hey, if they are willing to title the game design challenge, “Bigger than Jesus,” I don’t see why we can’t have prayer meetings at GDC…lol. 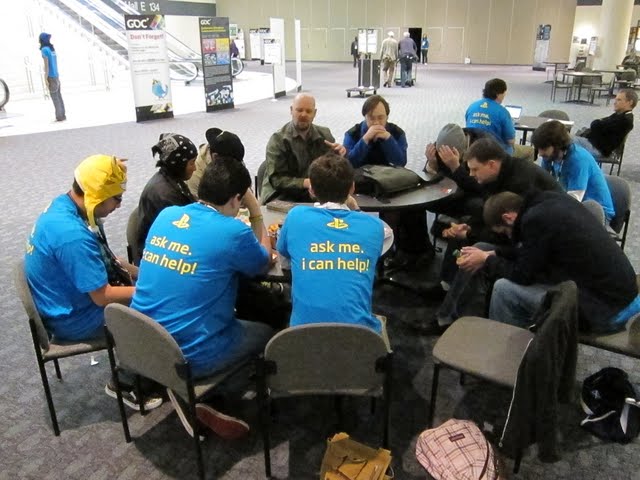 A couple things happened differently this year. First, we had non-volunteer developers from a game company join us. We also had a girl who drove down here from Redding, CA. She was a BSSM student I’d met the week prior when I was at a Bethel Conference. Let’s just say it was quite spirit driven this year around. I even took a group to check out the San Francisco House of prayer (http://sfhouseofprayer.org/). 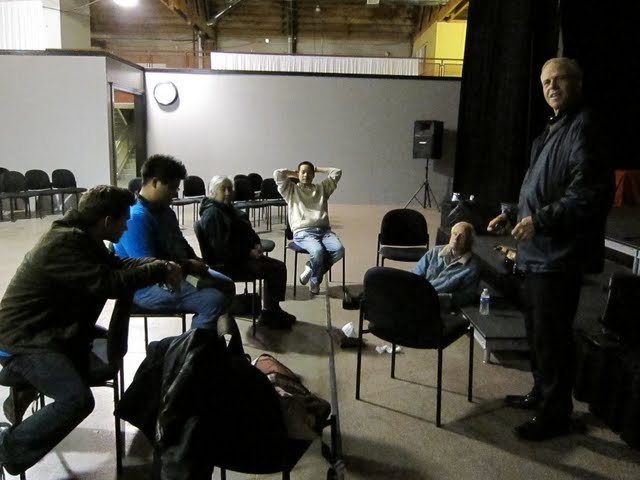 There were 4 of us who took a cab to check out SFHOP. When we showed up, there were 3 older people there in a big empty room. I feel like there was a mutual exchange of encouragement on both sides. If anything, it was very quest like. Party of 4 going to receive prayer from the elders at the house of prayer. 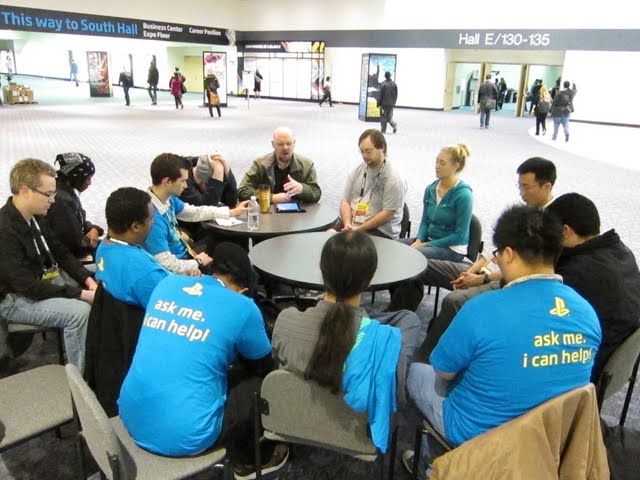 Chris, from Soma Games, led one of the mornings, sharing scripture. We gave testimonies. We shared our visions, hopes, and dreams. Each morning we paid attention to the needs and life situation of each person and edified/encouraged one another. 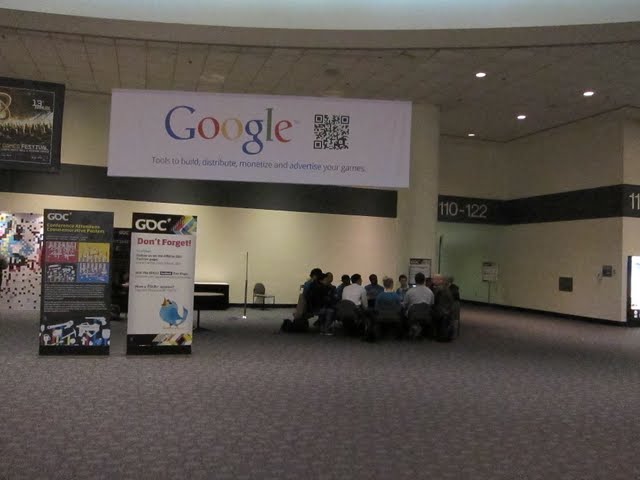 The last morning was especially memorable. Eddie and Carl led. A verse was shared in regards to the presence we have in this industry. Carl talked about connecting. Grant shared and prayed as well. If anything, I believe that something has started.. Perhaps, a love revolution every morning at the GDC– a door has opened that no man can close. It truly is nothing that any of us are doing. We just simply show up and things happen. 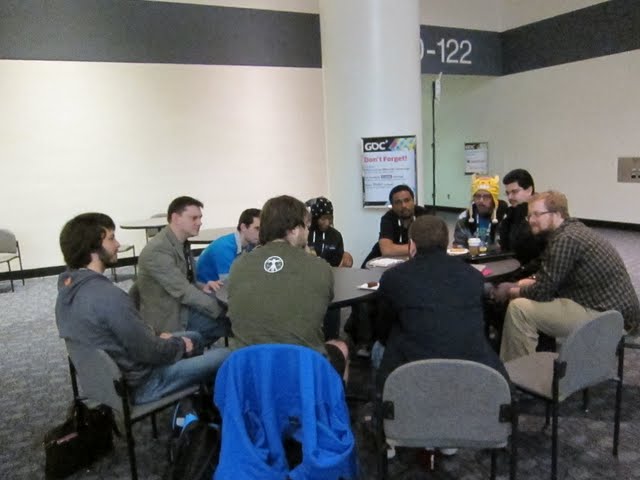 Bigger than Jesus? Sure, why not? Jesus did say after all:

Very truly I tell you, whoever believes in me will do the works I have been doing, and they will do even greater things than these, because I am going to the Father. And I will do whatever you ask in my name, so that the Father may be glorified in the Son.You may ask me for anything in my name, and I will do it.

The Jesus experience doesn’t end for me there. I took a trip to visit my brothers and sisters up at University of California, San Francisco. I stayed with Johanna, a dental student and went to church with her on Sunday. I was seriously exhausted. To get home, I’d have to take the Muni to BART, then to Caltrain, then to bus 17, then take a bus 16 to my house with all my stuff. Good thing I’d left most of my schwag with the UCSF students.

Johanna’s church had an interim pastor. Pastor Barney, a spirit filled minister who used to shepherd a foursquare church in SANTA CRUZ. It was so odd hearing him preach about the streets that I live on. Not only that, he’d invited a couple to talk about their experiences. This couple was from Santa Cruz and was driving straight back to home. I slept the whole way back. 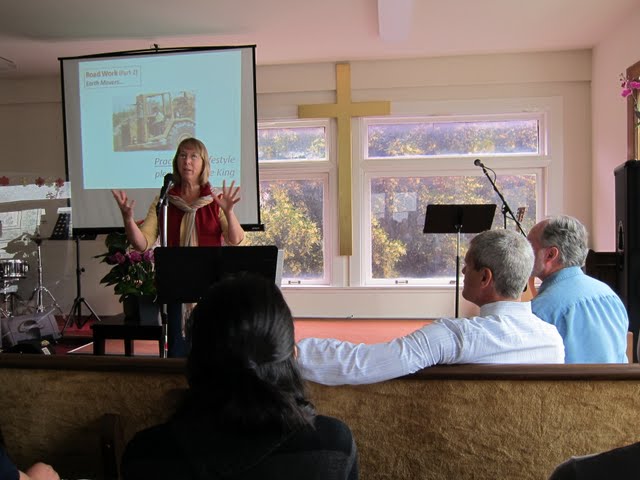 5 thoughts on “GDC Wanting to be Bigger than Jesus”